What Is Stamping?- Types, Operation & Application 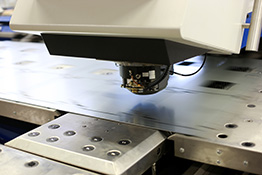 Stamping or pressing is a manufacturing process used to convert flat metal sheets into final shapes. In this process, a flat sheet of metal, either in the form of a blank or in the form of a coil, is placed in a stamping press where a tool and die surface forms the metal into a final shape.

This could be a one-step process where each stroke of the press creates the desired shape on the sheet metal part, or it could be done through a series of steps. The process is usually carried out on sheet metal, but can also be used on other materials such as polystyrene.

Progressive dies are commonly fed from a coil of steel, coil reel for an unwinding of the coil to a straightener to level the coil and then into a feeder which advances the material into the press and dies at a predetermined feed length. Depending on part complexity, the number of stations in the die can be determined.

A Brief History
It is believed that the first coins came from the 7th century BC. Were coined by the Lydians in what is modern-day Turkey. Coin hammering remained the most important method of coin production until 1550. Marx Schwab in Germany developed a new stamping process in which up to 12 men turned a large wheel to press metal into coins. The punching process was further innovated in the 1880s.

Stamped parts were used for mass-produced bicycles in the 1880s. Stamping replaced die forging and machining, resulting in greatly reduced costs. Although they weren’t as strong as die forged parts, they were of sufficient quality.

In 1890, stamped bicycle parts were imported from Germany to the USA. US companies then began to have stamping machines made to measure by US machine tool manufacturers. Through research and development, Western Wheel was able to stamp most of the bicycle parts.

In the history of metal stamping, forging, and deep drawing, presses of all kinds are the backbones of metal manufacturing. The processes are further improved by moving more metal in one press stroke. Press and interconnected automation devices increase production rates, reduce labor costs and provide more safety for workers.