The potential of flexible mobile robots in sheet metal fabrication 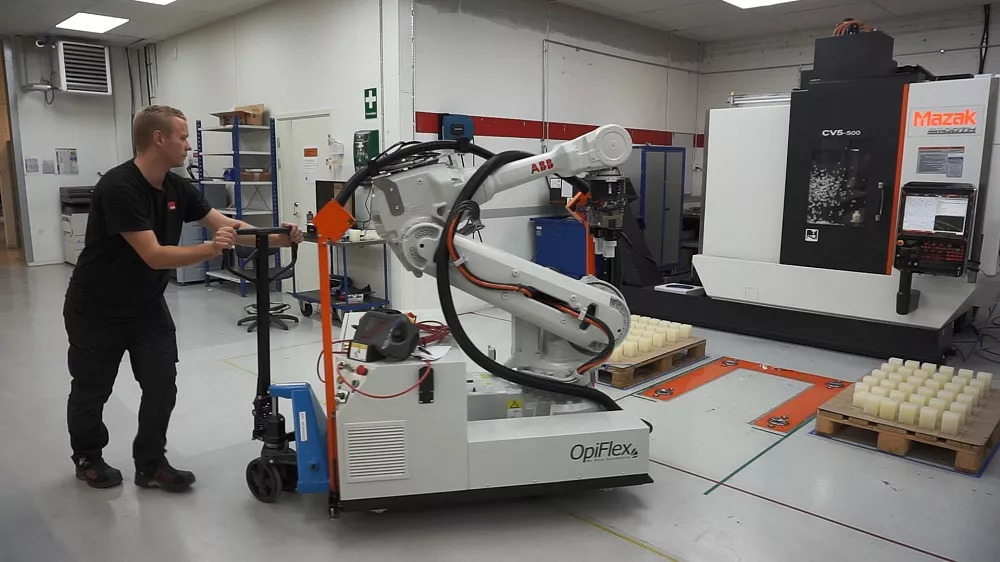 At a laboratory in the University of Skövde, a small city in south-central Sweden, Anna Syberfeldt spoke and gestured to a nearby robot. The robot did as she told, carrying an object in a certain way and orientation, transporting it at a specific speed and on a specific path. The professor of production engineering’s research focuses on human-automation interaction.

“We are developing robotic solutions that can interact with humans in an efficient way,” she said, “and also in a way humans can understand. We humans communicate using voice and gestures. And we want to do the same with robots.”

Several hours’ drive to the northwest, closer to Stockholm, Johan Frisk stood near a robot operating a press brake. Instead of safety fences, the system used area scanners coupled with software to provide safeguarding.

Frisk was monitoring what he called a flexible mobile robot (FMR). It’s not a cobot but instead uses a traditional articulating arm able to carry full payloads at full speeds. As Frisk put it, “They’re coexisting robots, not collaborative robots.”

Once the batch is finished, the operator moves the system to another press brake, a panel bender, a stamping press, or a variety of other machines. All can be operated manually or with an FMR. One press brake might have someone manually running a job, while an adjacent brake might be running a batch with an FMR.
Frisk is CEO of OpiFlex, a Swedish company he founded in 2013 with the aim of taking on the automation challenges in the high-mix/low-volume operations of small and medium-sized enterprises (SMEs), which together make up the majority of global manufacturing. Syberfeldt and Frisk have worked together in various laboratory and industrial settings, and both talk of a future of industrial robotics with far less restrictive physical and communicative boundaries. Safeguarding innovation has reduced those physical barriers. And instead of programming, people will “train” robots to work with certain machines and systems. After training, a robot will be able to “see” a machine, be fed a job from the manufacturing execution system (MES) or similar software, program itself, and begin the job.

Their vision is echoed in a paper presented at the 2016 IEEE/RSJ International Conference on Intelligent Robots and Systems, titled the “Fourth Robotic Revolution,” by authors Dominik Boesl at the Technical University of Munich and Bernd Liepert with KUKA and euRobotics. “For a very long time, automation was driven by systems that were programmed, line by line, to repeat more or less complex tasks at the highest speed and accuracy. Unfortunately, this one-sided optimization hindered them from becoming flexible and versatile tools … Therefore, the desire for perceptive and cognitive robots is obvious. Machines should understand what their users and operators want to do, instead of being programmed to repeat basic tasks … [one day] we will be able to come up with systems that will understand what we want them to do and, maybe one day, even learn like a robot apprentice.”

We’re not quite there yet. Still, judging by FMRs operating in European sheet metal shops today and work done by Syberfeldt and other researchers, we’ve come a long way just within the past few years. FMRs are out of the laboratory and now working in industry. A number of sheet metal operations in Europe have been operating with FMRs for several years. OpiFlex also has partners in North America and hopes to start moving stateside sometime in 2022.