Nitrogen vs. Oxygen: Which Should You Use to Cut Steel? 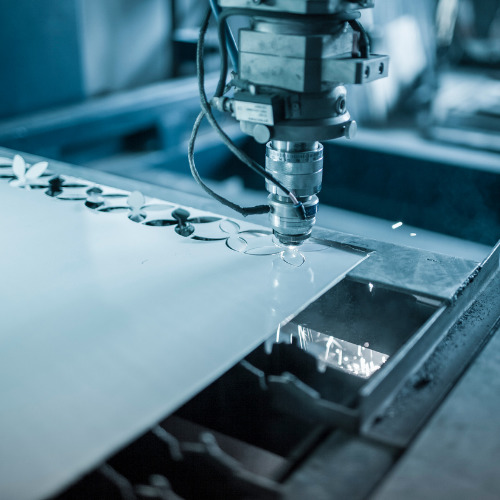 According to Fabricating and Metalworking:

Laser cutting is a thermal machining process where the laser beam serves as a tool. Specific parameters used in this process, such as laser power and assist gas type, will significantly impact the overall quality and processing time during operation. The most common assist gases used are oxygen and nitrogen. They are selected based on the type of material being cut, its thickness and the edge quality required.

Traditionally, oxygen is most commonly used when cutting steels. Thin steel does not require a significant amount of power due to the burning process, which involves an exothermic reaction – a chemical reaction of oxygen-burning iron which releases excess energy through heat and light. The oxygen will do approximately 60 percent of the work. This, in turn, is the limiting factor to cutting speed. Only so much power can be applied to the material before too much burning occurs, resulting in a poor cut. This means that the cut speed, using oxygen as an assist gas in thin steel, would be the same for a 1500 watt to a 6000 watt laser.

Nitrogen is generally used when cutting stainless or aluminum in order to achieve excellent quality. Unlike oxygen, nitrogen serves as a shielding gas in light gauge material to stop the burning process and allow the laser to vaporize the material. This means that power is the determining factor in cutting speed; more power equals more speed.

Laser powers have been steadily increasing in various applications. This development has given the laser user a justifiable choice for his processing needs as he can now consider nitrogen assist gas as a valid method to process steel.

FACTORS FOR CONSIDERATION
In order to make a proper decision between oxygen and nitrogen, the following criteria must be considered:

Let’s examine these three factors in some detail:

Processing speeds. As previously stated, oxygen cutting speeds are limited by the power that can be applied, whereas nitrogen cutting speeds are directly related to power. In some cases, higher laser powers where nitrogen is employed in cutting thin steel allow the laser user to expect processing speeds three times to four times faster than what can be achieved when using oxygen. However, laser cutting of steel with nitrogen is not limited to thin material. Nitrogen can be used as an assist gas for thicker steels, with the maximum thickness depending on the available laser power. While nitrogen will provide faster processing speeds in steel up to 1/8 in, this is not the case in thicker materials, in which case oxygen will provide faster speeds as material thickness increases.

THE RIGHT CHOICE
Taking all of the factors into consideration, the following determination can be made:

In thin steels, if a laser user can increase their processing speeds and produce more parts with better quality at either the same or slightly greater cost, then nitrogen should be strongly considered as the assist gas. As material thickness increases, the decision becomes more challenging. If the parts to be produced require secondary operations, the user must weigh the costs of the additional processes and handling in order to determine if the cost of the additional nitrogen in the laser cutting process will provide the most cost effective solution.

In order to make the most cost effective decision, all of these factors must be weighed. But what it all boils down to – and what is most important – is that laser users do indeed have a choice.