Grinding is an abrasive machining process that uses a grinding wheel as the cutting tool.

A wide variety of machines are used for grinding:

Grinding practice is a large and diverse area of manufacturing and toolmaking. It can produce very fine finishes and very accurate dimensions; yet in mass production contexts it can also rough out large volumes of metal quite rapidly. It is usually better suited to the machining of very hard materials than is “regular” machining (that is, cutting larger chips with cutting tools such as tool bits or milling cutters), and until recent decades it was the only practical way to machine such materials as hardened steels. Compared to “regular” machining, it is usually better suited to taking very shallow cuts, such as reducing a shaft’s diameter by half a thousandth of an inch or 12.7 μm.

Grinding is a subset of cutting, as grinding is a true metal-cutting process. Each grain of abrasive functions as a microscopic single-point cutting edge (although of high negative rake angle), and shears a tiny chip that is analogous to what would conventionally be called a “cut” chip (turning, milling, drilling, tapping, etc.). However, among people who work in the machining fields, the term cutting is often understood to refer to the macroscopic cutting operations, and grinding is often mentally categorized as a “separate” process. This is why the terms are usually used in separately in shop-floor practice.

Lapping and sanding are subsets of grinding. 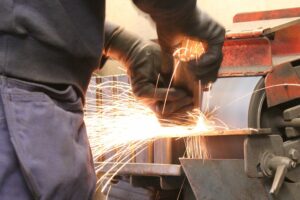 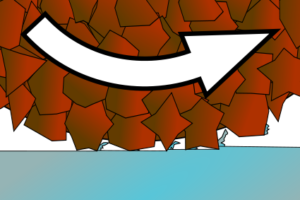 Sketch of how abrasive particles in a grinding wheel remove material from a workpiece.

Surface grinding’uses a rotating abrasive wheel to remove material, creating a flat surface. The tolerances that are normally achieved with grinding are ±2×10−4 inches (5.1 µm) for grinding a flat material and ±3×10−4inches (7.6 µm) for a parallel surface.[1]

The surface grinder is composed of an abrasive wheel, a workholding device known as a chuck, either electromagnetic or vacuum, and a reciprocating table.

Grinding is commonly used on cast iron and various types of steel. These materials lend themselves to grinding because they can be held by the magnetic chuck commonly used on grinding machines and do not melt into the wheel, clogging it and preventing it from cutting. Materials that are less commonly ground are aluminum, stainless steel, brass, and plastics. These all tend to clog the cutting wheel more than steel and cast iron, but with special techniques it is possible to grind them.

Cylindrical grinding (also called center-type grinding) is used to grind the cylindrical surfaces and shoulders of the workpiece. The workpiece is mounted on centers and rotated by a device known as a drive dog or center driver. The abrasive wheel and the workpiece are rotated by separate motors and at different speeds. The table can be adjusted to produce tapers. The wheel head can be swiveled. The five types of cylindrical grinding are: outside diameter (OD) grinding, inside diameter (ID) grinding, plunge grinding, creep feed grinding, and centerless grinding.[2]

A cylindrical grinder has a grinding (abrasive) wheel, two centers that hold the workpiece, and a chuck, grinding dog, or other mechanism to drive the work. Most cylindrical grinding machines include a swivel to allow the forming of tapered pieces. The wheel and workpiece move parallel to one another in both the radial and longitudinal directions. The abrasive wheel can have many shapes. Standard disk-shaped wheels can be used to create a tapered or straight workpiece geometry, while formed wheels are used to create a shaped workpiece. The process using a formed wheel creates less vibration than using a regular disk-shaped wheel.[3]

Creep-feed grinding (CFG) was invented in Germany in the late 1950s by Edmund and Gerhard Lang. Unlike normal grinding, which is used primarily to finish surfaces, CFG is used for high rates of material removal, competing with milling and turning as a manufacturing process choice. Depths of cut of up to 6 mm (0.25 inches) are used along with low workpiece speed. Surfaces with a softer-grade resin bond are used to keep workpiece temperature low and an improved surface finish up to 1.6 micrometres Rmax

With CFG it takes 117 s to remove 1 in3 (16 cm3) of material, whereas precision grinding would take more than 200 s to do the same. CFG has the disadvantage of a wheel that is constantly degrading, requires high spindle power, 51 hp (38 kW), and is limited in the length of part it can machine.[4]

To address the problem of wheel sharpness, continuous-dress creep-feed grinding (CDCF) was developed in the 1970s. It dresses the wheel constantly during machining, keeping it in a state of specified sharpness. It takes only 17 s to remove 1 in3 (16 cm3) of material, a huge gain in productivity. 38 hp (28 kW) spindle power is required, with a low to conventional spindle speeds. The limit on part length was erased.

High-efficiency deep grinding (HEDG) uses plated superabrasive wheels, which never need dressing and last longer than other wheels. This reduces capital equipment investment costs. HEDG can be used on long part lengths and removes material at a rate of 1 in3 (16 cm3) in 83 s. It requires high spindle power and high spindle speeds.[4]

Peel grinding, patented under the name of Quickpoint in 1985 by Erwin Junker Maschinenfabrik, GmbH in Nordrach, Germany, uses a tool with a superabrasive nose and can machine cylindrical parts.[4]

Internal grinding is used to grind the internal diameter of the workpiece. Tapered holes can be ground with the use of internal grinders that can swivel on the horizontal.

Pre-grinding When a new tool has been built and has been heat-treated, it is pre-ground before welding or hardfacing commences. This usually involves grinding the OD slightly higher than the finish grind OD to ensure the correct finish size.

Electrolytic in-process dressing (ELID) grinding is one of the most accurate grinding methods. In this ultra precision grinding technology the grinding wheel is dressed electrochemically and in-process to maintain the accuracy of the grinding. An ELID cell consists of a metal bonded grinding wheel, a cathode electrode, a pulsed DC power supply and electrolyte. The wheel is connected to the positive terminal of the DC power supply through a carbon brush whereas the electrode is connected to the negative pole of the power supply. Usually alkaline liquids are used as both electrolytes and coolant for grinding. A nozzle is used to inject the electrolyte into the gap between wheel and electrode. The gap is usually maintained to be approximately 0.1mm to 0.3 mm. During the grinding operation one side of the wheel takes part in the grinding operation whereas the other side of the wheel is being dressed by electrochemical reaction. The dissolution of the metallic bond material is caused by the dressing which in turns results continuous protrusion of new sharp grits.[6] 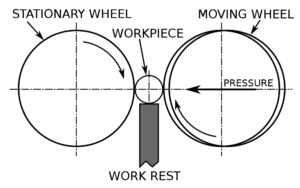